Shortly after this was published, I was contacted by Squarespace founder and CEO Anthony Casalena. We had a lengthy email dialog and as a result, I've written a followup to this post. I'd advise not to read one without the other. Thanks!

After my surge of traffic this week, I realized I screwed up on my site's RSS feed. While the link on my front page goes to my Feedburner feed instead of Squarespace's built in feed, I had missed the setting in the control panel to change the default RSS feed.

Turns out that all of my new visitors who chose to subscribe (Thanks!) did so with their brower's built-in RSS functionality and not my Feedburner RSS link.

I admit that's my fault. But I was curious how many new RSS subscribers I had. The last thing I want to do is ask new subscribers to change their feeds, so I was delighted to see that Squarespace 6 promises full RSS statistics: 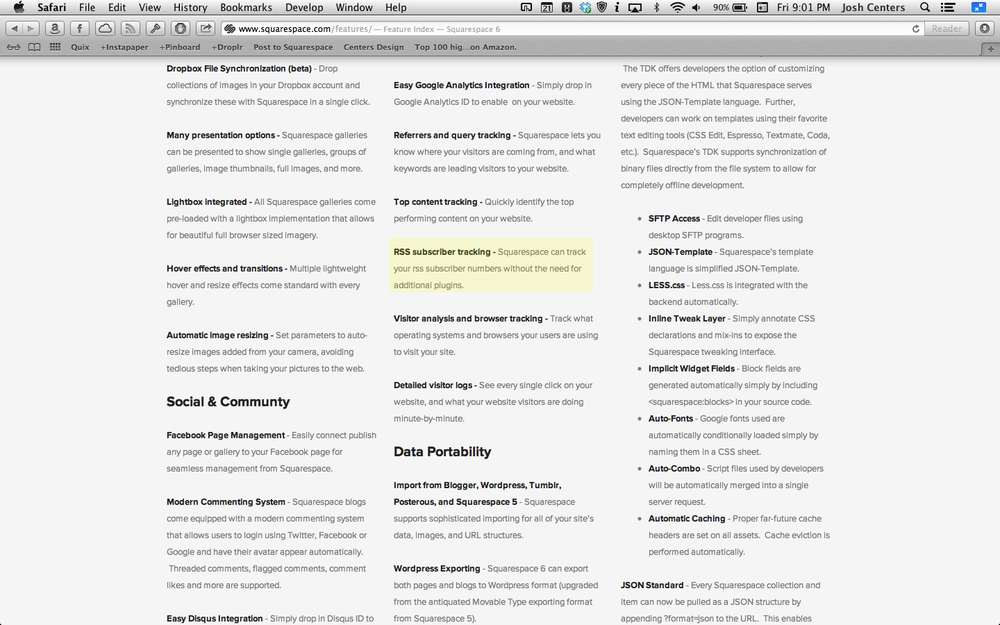 I dug through every setting trying to find it. Finally, I emailed support, and this is what they said about this advertised feature:

As [for] getting a subscriber count, there is no way to get an exact count. 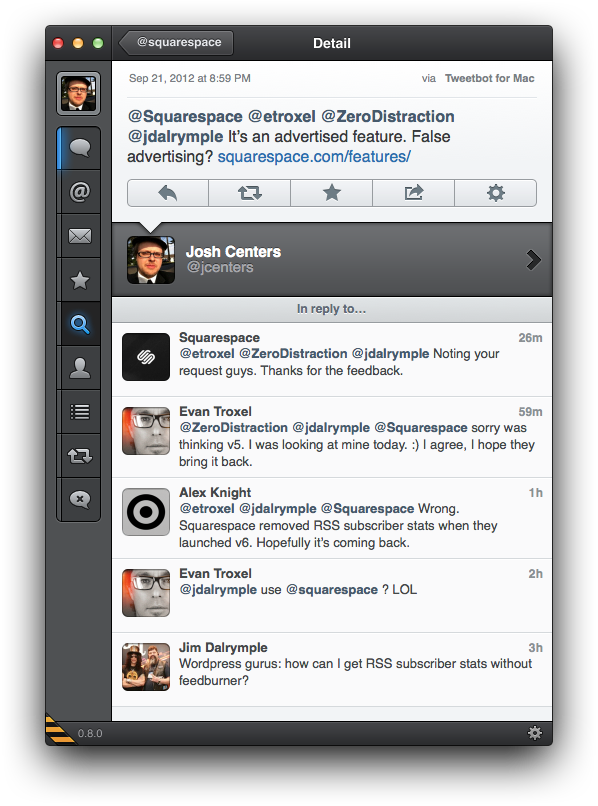 Noting the request? It's not a feature request, it's asking for them to do what they say they do.

Look, don't get me wrong, I love Squarespace 6. It's cheap, it's no-hassle, it's fun to use, and it scales incredibly well.

But at the moment, it's half-baked. Lots of things are broken, important things. For instance, I can't put permalinks in my post footers because of a bug. After a month talking with support, there is still not solution. I could fix that in 5 minutes if I could access the code.

Look Squarespace, you advertise on every tech blog and podcast on the internet. But if you want the business of serious tech bloggers, you need to put top priority on essential features and keeping to your word.

I'm planning an extensive review of Squarespace 6 soon, the good and the bad. Watch this space.

Note to my RSS Subscribers: I'm keeping things as they are for the forseeable future. The choice of feeds is yours. While I'd love to know how many of you there are, the feeds are there for your benefit, not mine.